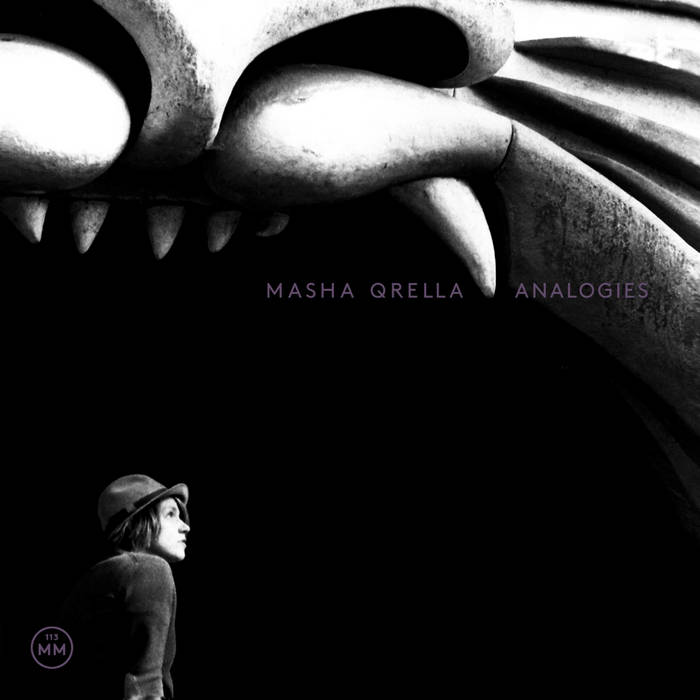 Chapter I: The Qrella Myth
Everybody was going on about it, yet no one seemed to really know that much at all. Still they all pretended to be sure of some part of the story, and everybody kept prying. Over the years it pretty much turned into the “Chinese Democracy” of the Berlin music scene: the new album by Masha Qrella, at long last.

And indeed it’s been more than half a decade since the release of her last studio album “Unsolved Remained” back in 2005. The only exception being “Speak Low”, a collection of beautifully rendered Kurt Weill and Frederick Loewe cover songs, released in 2009. Still, the legend of this mythical new album kept growing with every step Masha made – or didn’t make, to be exact.

Well, it’s been enough time spent in the gossip factory: “ANALOGIES”, Masha’s new album will be released May 4, 2012. It was about time. And sorry for sounding like a cliché, but it’s true: It was well worth the wait.
Chapter II: The Qrella Sound
In times of digital culture, of having every type of information permanently at our disposal, it seems to be rather easy to write great songs even if you haven’t got the chops or an interesting biography to draw inspiration from. That said it is still hugely advantageous to have some kind of musical story to tell – a case in point is this new album, “ANALOGIES”. It simply shows how important it is to stay true to your roots, to your musical path. No matter how many years it might take you to get somewhere.
The resulting sound, the confidence, the virtuosity of composition at work in these songs, their post rock leanings, shimmering folk layers and hymnal pop gestures, are clearly not just references to something found on the Internet. They are the result of actual experience, years and years dedicated to actually playing and breathing music. It’s just obvious, and you can hear it in every note and every melody on this album.

Chapter III: The Qrella Definition of Pop
Ever since the Berlin party heydays of the early nineties, Masha Qrella (and also her band Mina) has been part of the city’s musical avant-garde; yet at the same time she kept an eye on that one thing which has always been the very core and heart of pop music: the song itself.

So, speaking of analogies and comparisons to Masha’s sound, there are musical forebears and soul mates scattered all over the history of pop: Starting out with her own postrock past and a certain proximity to Stereolab’s experimental library music, we can easily move on to The Cure’s mainstream melancholy or even to the all-embracing sonic albatross wings of band like Fleetwood Mac.

Listening to “ANALOGIES”, I imagine Stevie Nicks, Robert Smith, Laetitia Sadier and Masha randomly meeting on a walk, somewhere in beautifully quiet Berlin-Pankow, let’s say hanging out on a bench in Bürgerpark, waving good-bye to each and every moment that passes. I know, it does sound a little pathetic, but this kind of timeless beauty is otherwise difficult to pinpoint, I have to say.

Chapter IV: Waiting for Qrella
So let’s try some more synaesthesia, see if some other comparisons and analogies make more sense. Plants? Well, if there was one plant in Berlin that was worth building a botanic garden for it’d be the Qrella Flower. Buds might come slow, I know, but when it blooms – Jesus! Perhaps I shouldn’t say this, because it might kill the whole beauty of it by attracting them all – all the Easy Jet-setters and backpackers, the cultural hyenas who eventually get to hear about it through the grapevine of gardenfork-media. Oh no, sir! I’d much rather keep this precious plant to myself – just like Gollum with his ring. Viewed in this light, perhaps it would have been better to stick to the rumors and myths and legends, to have no end to it all, to just have them coming forever while keeping the secret.
Call it a rare plant, call it something else: it’s safe to say that this album is huge. I’d even say there are ten hit singles on “ANALOGIES” – and, oh, there’s no more than ten tracks in total, you ask? Well, there you go: ten hit singles – might as well be another one of those myths surrounding this release.

If you want to find out more about this particular artist, I guess you have to ask Masha Qrella in person. I am not going to give away any more secrets. No way. I’m off, fishing with my buddies.
Maurice Summen, Staatsakt

Bandcamp Daily  your guide to the world of Bandcamp

MF DOOM is given his flowers, plus appearances from MC Jada Imani and Stanley Ipkuss